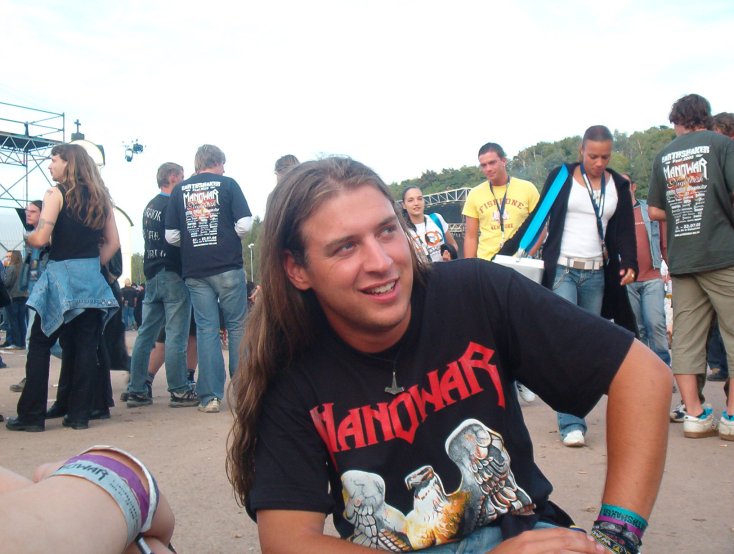 and here is my ManOwaR-Story:

it was on my ninth year on a cold winters day in the year 1992, as i walked trough the enchanted rooms of my parents house. I heard the sound of horses and men at arms. I felt compelled to walk on and find the place of these sounds. and when the sound became louder, I was standing in the door to the living room in our house. before me my babysitter, standing, waiting. I thought to myself, for whom or for what is he waiting. suddenly a gust of wind came up from the front door. I saw him, sitting at the table to make his homework. He listened to the great sound of a band called ManOwaR. He has to make a lot of homework but the look in his eyes told all those books that he will leave this table only in victory or death.

My heart began to pound. Storm clouds filled the sky with darkness. Rain came, and the wind blew such anger that I held fast to the door handle. I watched this big babysitter rais his pencil into the air. Without warning, screaming his war cry led the attack. Down to the table he put his pencil of war.

As I heard his war cry, I was scared and pale. He turned around saw me. He asked me: what happenedÇs to you?

I told him that I heard this strange roumors and music and I wonder how he could make his home works during he listened to this great sound.

he told me that this band fills him up with power and might, so he could concentrate.

since this time the name ManOwaR was burned in my brain.

Now this babysitter, his name is Bastian Wolf, is one of my greatest friends and I thank him for this great life I have with him and the powerfull music of ManOwaR an Heavy Metal.

I hope you understand my story with my terrible schoolenglish Greetings from Germany!

Hail to you and the Swedish Defenders of Steel

Fuck the World
Hail and Kill